The Lelos’ Lineup for opener Against England

The Lelos Head Coach Levan Maisashvili named the match day 23 for Georgia’s Autumn Nations Cup opener. In the first round of the tournament, Georgia will face the running Six Nations Champion and RWC finalist England at iconic Twickenham Stadium at 19:00 (Georgian time) on November 14.

We have had two matches against England so far –  In Georgia’s first-ever RWC match in Australia back in 2003, the future World Champion won 84:6. In New Zealand in 2011, we stood against England as equals for an hour, though the experienced opponent scored us three tries in the last 20 minutes of the match and won 41:10.

One Match Apiece Before Round One

Before the first round of Autumn Nations Cup, the opponents managed to play one warm-up each and missed one game each due to the COVID pandemic. The Lelos’ first game after the 8-month lockdown, which they lost to Scotland 7:48, was played at Murrayfield on October 23. The next game against Russia, scheduled for November 1 in Tbilisi, got postponed.

England ought to have played against the Barbarians on October 25, but this match also got cancelled because of the pandemic, and two weeks ago England defeated Italy in Rome 34:5, thus winning the tournament.

With four Changes in Pack

Compared to the match played at Murrayfield three weeks ago, there are four changes among forwards. In the front row, Mikheil Nariashvili keeps his place as prop and hooker Shalva Mamukashvili is promoted from the bench to the starting 15, while the tighthead prop is Beka Gigashvili, who did not play against Scotland due to an injury.

In the second row, Grigol Kerdikoshvili will be joined by Lasha Jaiani. Kerdikoshvili started the previous game too, and Jaiani was not in the squad at all. Both locks have two caps apiece so far.

Third-row positions are retained by Beka Gorgadze and Beka Saginadze, while the second flanker position is taken by Giorgi (Koki) Tkhilaishvili, who was also promoted from the bench.

There are four changes among the backs. The six backs have 220 caps in total. Talented winger and mid-fielder, U20 program graduate Sandro Svanidze, to win his first senior international cap for Georgia – starts at 11. The second wing is Akaki Tabutsadze, who scored a try against Scotland and collected a total 6 tries during the three internationals he has played so far.

At center, team captain Merab Sharikadze will play together with Giorgi Kveseladze, who sat at the bench during the Scotland match. Fullback Lasha Khmaladze healed his injury and will play in the starting 15 against England.

There have also been some changes in half backs, where scrum-half Gela Aprasidze was promoted to the starting 15, and the position of fly half was entrusted to Tedo Abzhandadze.

Hooker Jaba Bregvadze and Prop Lexo Kaulashvili, who had started the Scotland match, were moved to the bench. Prop Guram Gogichashvili remains among the substitutes. The substitute second-row forward is Otar Giorgadze, who can also play in the third row, and third-row forward – Tornike Jalaghonia, who had his debut in the Lelos this year against Portugal and is going to get his second cap on November 14.

Scrum-half Vasil Lobzhanidze and backs Deme Tapladze and Sandro Todua are also on the bench. All three had started the game against Scotland. 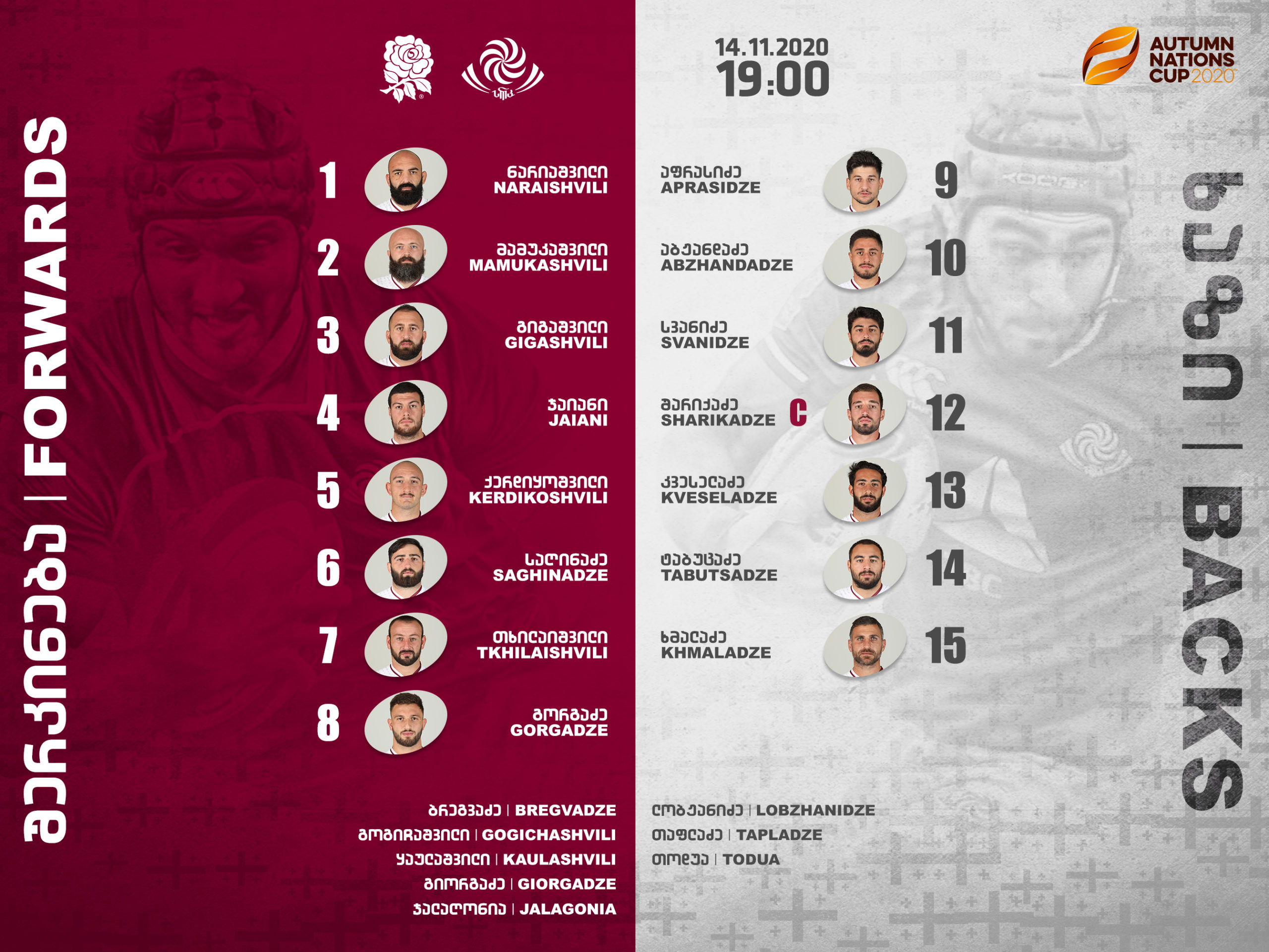 Autumn Nations Cup. Round One