The Lelos lineup for Wales

Five changes have been made after England game, as Levan Maisashvili named the Lelos matchday squad to face Wales in Autumn Nations Cup 2020 round two. The game scheduled for November 21 in Llanelli will kick off at 21:15 (GMT+4).

In the first round, the Lelos played England, eventually losing to Six Nations champions 40-0, while Wales played Ireland away in Dublin and lost 9:32.

Two changes among the backs

Maisashvili promoted two experienced backs back to starting team: Vasil Lobzhanidze will start at 9, joining fly-half Tedo Abzhandadze at halfback. Since 2018, Abzhandadze has played 17 times for Georgia, 16 of which was in the starting 15. Abzhandadze partnered up with Lobzhanidze in 12 matches.

Captain Merab Sharikadze will retain his partnership with Giorgi Kveseladze in mid-field. While Akaki Tabutsadze keeps his place at right-wing. At the same time experienced Sandro Todua is promoted from the bench to the left-wing, with Lasha Khmaladze remaining as a fullback, who is set to win 85th cap against Wales. The backs’ total number of caps is 339.

Three changes in the pack

Former Sun Wolves hooker with Super Rugby experience, Jaba Bregvadze starts as hooker against Wales, while Mikheil Nariashvili and Beka Gigashvili stay as props. Although all three of them have substantial international experience, it is only the second time as this trio starts together upfront.

Highly experienced lock, Kote Mikautadze starts in the second row, where he will be joined by Grigol Kerdikoshvili for the first time.

Otar Giorgadze, Beka Saghinadze and Beka Gorgadze to bind in the third row. The forwards’ total number of caps is 275.

Substitute front-row forwards are Guram Gogichashvili and Lexo Kaulashvili, who also acted as substitutes in England game; Giorgi Chkoidze, who had not played against Scotland and England, was named substitute hooker. After the return of Mikautadze, Lasha Jaiani was moved to the bench together with Giorgi Tkhilaishvili, who also was in the starting 15 at England match. 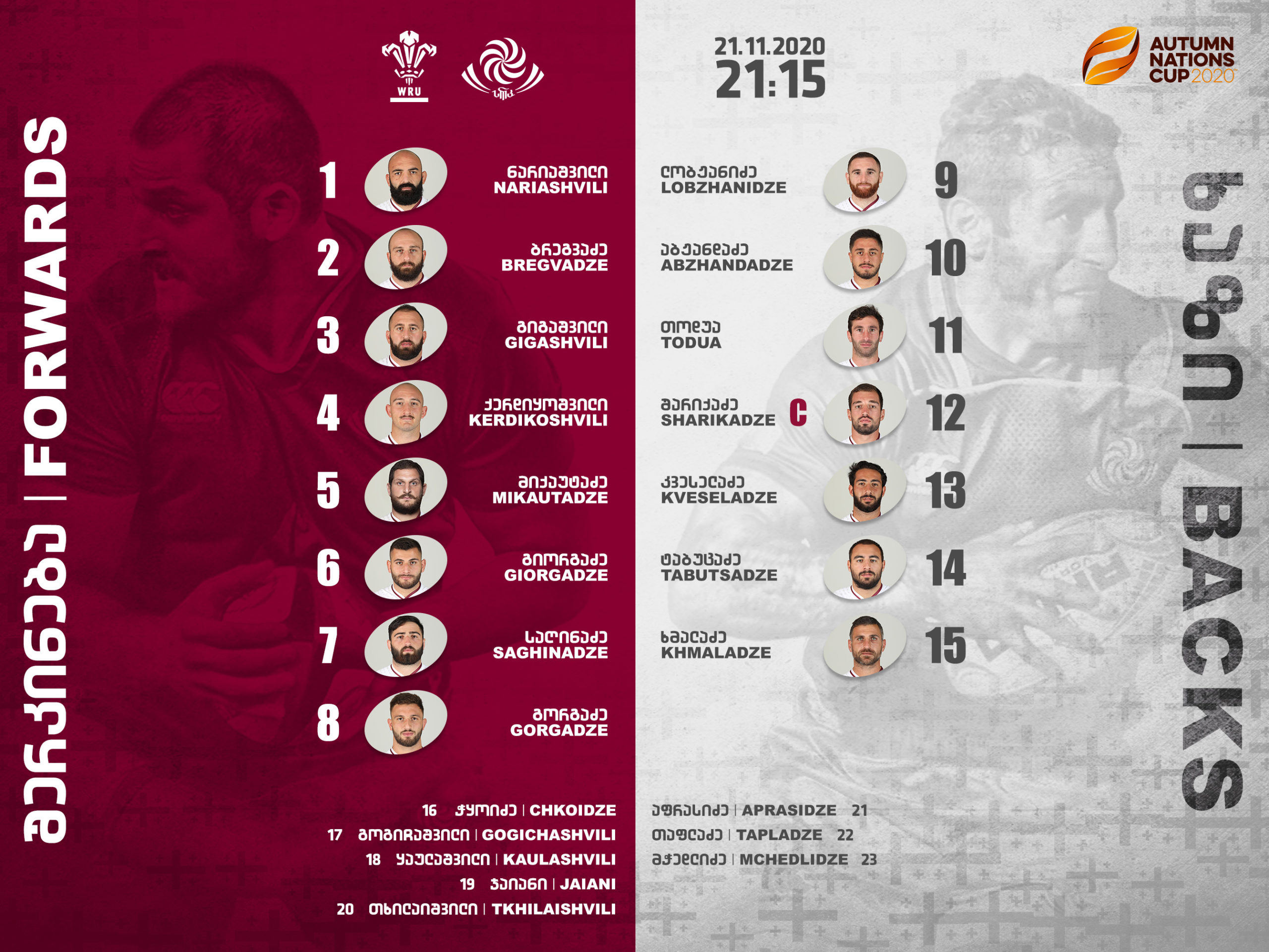 The squad with more stats