The Lelos lineup for the Finals Round against Fiji

As Autumn Nations Cup 2020 heads to its finish, Levan Maisashvili named The Lelos’ matchday squad to face Fiji in the Finals Round of the tournament. The Men from Caucasus are set to face their Pacific rivals on December 5th at BT Murrayfield.

The Georgian coaching staff made three changes to the starting fifteen and some in reserves after the game against Ireland in Dublin. Tough and powerful Beka Gorgadze and fast and experienced Lasha Khmaladze will not be there for Fiji game due to injuries. As for the rest, Levan Maisashvili named the best Georgia side possible for their final match of the tournament.

TODUA BACK AT WING

The duo of Vasil Lobzhanidze and Tedo Azhandadze will start their third game in the row at Autumn Nations Cup at half-backs.

The impervious duet of Merab Sharikadze and Giorgi Kveseladze, who collectively made 39 tackles against Ireland, will start in mid-field.

Akaki Tabitsadze remains at his spot wearing number 14 jersey, while Sandro Todua is set to start as 11 instead of Tamaz Mchedlidze. Soso Matiashvili sums up back three as full-back.

The front row remains unchanged against Fiji – props Mikheil Nariashvili and Beka Gigashvili to start their third game, while hooker Shalva Mamukashvili will start his second match in this trio. Jaba Bregvadze is going to replace Mamukashvili; Guram Gogichashvili and Giorgi Melikidze will be prop subs.

After recovering from rib injury, lock Kote Mikautadze is back in the squad in the second row to join with Lasha Jaiani, as for Grogol Kerdikoshvili, he will wait for his call on bench.

Young Tornike Jalagonia has been given a crack at eight after Beka Gorgadze got ruled out due to knee injury. Otar Giorgadze and Beka Saginadze named as open and blindside flankers. Mikheil Gachechiladze will act as third-row replacement.

“As this is the final week of the tournament, we are mostly focused on the game and made squad selection according to several criteria. We selected the players who are best prepared for the game at current moment. Unfortunately, we also have some injuries, which obviously influenced the selection process, and it is very unfortunate that we will lack such a leader as Beka Gorgadze is. He is a huge force behind the team.

“Young Tornike Jalagonia, who performed exceptionally well against Ireland, will prepare to start instead of him on Saturday. This game will be the perfect opportunity for him to grow.

“I am very happy to have Kote Mikautadze back in lineup, as he recovered from the injury picked against Wales. Otar Giorgadze is also set to start against Fiji on Saturday. Overall, the team is well balanced, so with the minor rotations, the team is not losing that combating ability, which is a very good sign.

“Fiji obviously is a very tough and dangerous opposition and if we let them control the ball, clearly they are capable of causing us some serious trouble. They have brilliant individualist players who can be very dangerous, thus we will need to confront them with our strength” – said Levan Maisashvili.

“We are delighted that the Fiji game is going ahead. We’ve had a really productive month and improved our collective understanding and competitiveness each game. We want to finish the tournament with a really positive performance and show that we’ve really grown up as a squad.

“We need to play more games against better opposition and benchmark ourselves so that we keep improving as a team and hopefully show some competitiveness that allows us to participate in the Tier 1 competitions in the future.

“It’s been superb having time to develop some of the younger players and see their confidence, skills and tactical appreciation improve. It will no doubt strengthen the competition for places in the squad” – said Neil Doak(Attack Coach).

“Georgia arrived at the 8N tournament very well prepared physically but having played very little rugby. The team have since gotten used to the pace of Tier 1 rugby and their improvement in both performance and competitiveness has grown with each week of the tournament.

“Fiji are blessed with some of the most talented players in the game. They have had a very difficult buildup to this match but will still be highly competitive because of their natural talent. Georgia must use the recent experience of their competitive games to their advantage and play at a pace and tempo that can give them an edge” – said Calvin Morriss (S&C Consultant, World Rugby). 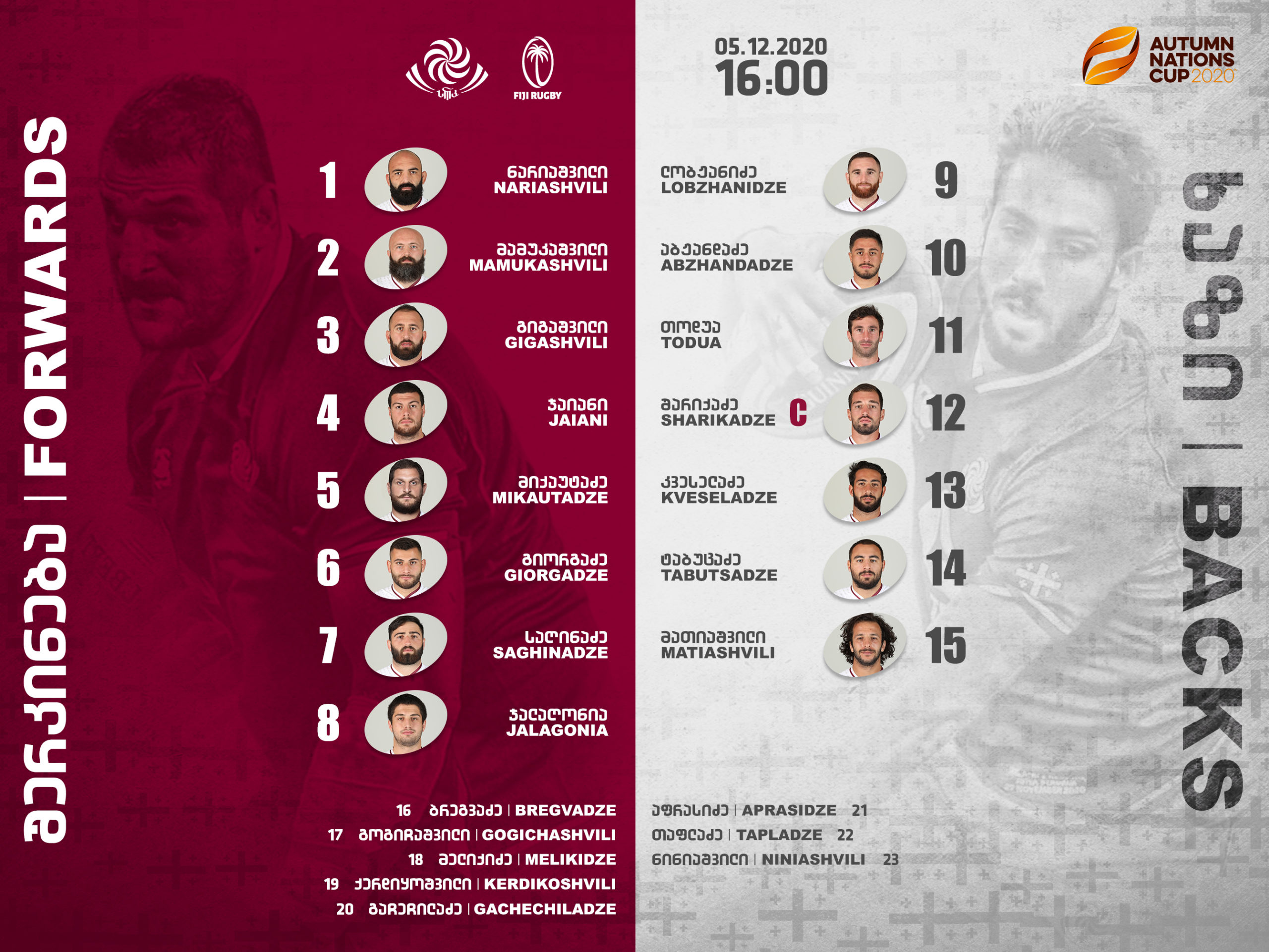 Georgia Caps and other stats