As compared to the previous game of March 20, when the Lelos defeated Russia in Kaliningrad 23:6 with a bonus point, there are three changes in the starting 15.

There is one perforce change among the backs: David Niniashvili got a slight injury and will be replaced by a seasoned Lasha Khmaladze who last played fly-half against Portugal.

Otherwise, the backs are as at the previous match. The halfbacks are composed of Gela Aprasidze and Tedo Abzhandadze; Merab Sharikadze and Giorgi Kveseladze play at center and Alexandre Todua and Aka Tabutsadze – at wings.

Replacement backs are unchanged: Mikheil Alania as replacement scrumhalf; Giorgi Babunashvili, who got his first cap against Russia – as replacement fly-half; Soso Matiashvili as fullback.

Two Changes and One Uncapped up-front

There are two changes among the forwards. Applying the rotation principle, the coaches placed Shalva Mamukashvili in the starting 15, and Giorgi Chkoidze – on the bench (instead of Jaba Bregvadze).

Numbers 1 and 3 remain unchanged – Beka Gigashvili and Giorgi Melikidze; in the second row Lasha Jaiani and David Gigauri start their third consecutive match; Beka Saginadze has recovered from his injury and returns to the third row to start the match together with Mikheil Gachechiladze and Tornike Jalagonia, while Giorgi Tkhilaishvili moves to the bench.

Nodar Cheishvili remains on the bench replacement second row forward, Nika Abuladze and Gia Kharaishvili – as replacement props. Kochebi prop Abuladze is going to collect his first international cap in this match. He stands for Guram Gogichashvili, who returned to Racing 92 as agreed.

Levan Maisashvili made the following comment on changes applied to team lineup:

„Nika worked well during these four weeks. It is unfortunate that he missed some training time due to a small injury, but now he is fit and ready for his debut. Niniashvili could not recover after the Russia match and we placed Lasha Khmaladze at fullback to replace him. Lasha is familiar with this position and we are confident that he should start the game. It is very good to have Beka Saginadze back after the two games he missed due to a muscle injury. In fact, we now have the best squad available.“ 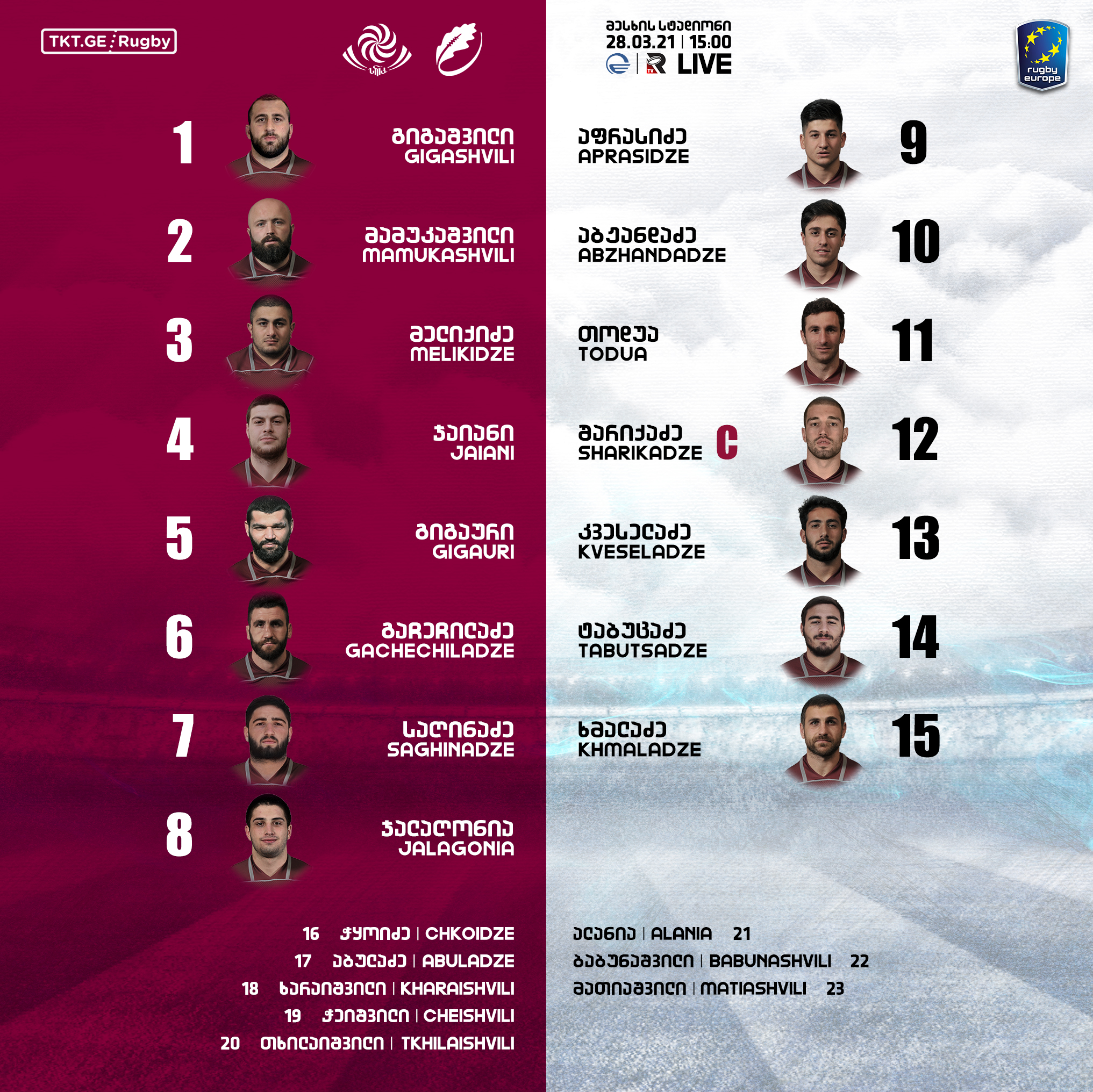