The Lelos’ Squad Against Netherlands

Georgia’s final REC 2021 match (which also serves as RWC 2023 Qualifier), will be played at 17:00 Georgian time in Kavkasioni Arena, Telavi. This is going to be the Lelos’ first home international in Kakheti.

The Lelos won all of their REC 2021 matches so far, they sit on top of the ranking list with 18 points and expect to receive the REC Trophy for the 13th time on June 26.

Ahead of Netherlands match, the Lelos played against Romania on March 28. As compared to this game, there are three changes among the backs.

Vasil Lobzhanidze, who had missed four previous matches due to COVID, prepares to play his first REC 2021 match in pair wit Tedo Abzhandadze.

Team Captain Merab Sharikadze and Giorgi Kveseladze start at center. At wings, we will see Aka Tabutsadze and Mirian Modebadze. Mirian skipped last three games and recovered just in time to stand in place of Sandro Todua, who recently got an injury.

Unfortunately, Lasha Khmaladze’s and Sandro Todua’s injuries are so heavy that they will have to miss all summer tests. David Meskhi is also unable to join the team on South Africa tour due to an injury, though Head Coach Levan Maisashvili hopes that he will be back in shape by Georgia’s match against Scotland on July 17:

„Unfortunately, both players joined the training camp with undetected injuries. Todua played Big 10 final with the injury, Khmaladze appears to have damaged a muscle.“ In the extended squad, he was replaced by Aia back Irakli Simsive, whom the fans remember from the Junior Lelos:

„As it turned out, David Meskhi also suffers from relapse of an old injury, so we cannot take him to South Africa. If he is fit by the time we return on July 11, we will consider returning him to the camp for Scotland match. As three backs dropped out during the camp period, we had to invite former Junior Lelo player Irakli Simsive, whom we are currently observing. Irakli showed consistently good performance throughout the domestic season, he is in a good shape and developing constantly. Irakli goes to South Africa together with the team and we will give him some playing exposure as soon as there is an opportunity,” – says Maisashvili.

As compared to the last match, there are five changes among the forwards. 23-year-old debutant Ilia Spanderashvili, former Junior Lelos Captain, then Georgian 7s and A team member, will start in the third row. Ilia joined the team as a reserve player just before the Russia game, though he did not make it to the pitch back then, and now he is in a starting line-up. Mikheil Gachechiladze and Beka Saginadze keep their places in the third row.

Second row is fully changed after Lasha Jaiani’s injury – we are going to see Kote Mikautadze and Nodar Cheishvili in the starting squad. Mikautadze has not played since Autumn Nations Cup 2020, and Cheishvili was on the bench during the previous games.

Giorgi Melikidze keeps his place as tight-head prop, while loose-head prop position was entrusted to US Professional League player Nikoloz Khatiashvili. The latter has 4 caps, the most recent – from the test against Argentina 4 years ago. Seasoned Jaba Bregvadze starts at hooker.

The upcoming match is going to be the Lelos’ first international to be played in Kakheti. Levan Maisashvili evaluates it as crucial:

„I welcome the initiative of Georgia Rugby Union to spread international rugby countrywide and allow more fans to see the Lelos’ home matches at home. Kakheti is a fantastic place and playing an international game in Telavi is important for development of rugby in the region. Due to the COVID pandemic, the stands will only be filled to 30% of their capacity. I hope they will enjoy the game.”

“As regards the squad, we are taking 32 players to South Africa and the squad was selected from their number. Considering that part of our international players had COVID, our choice was limited. We look at June 26 match as a preparation for the South Africa tour. We have not played in a long time and need warming up. “ 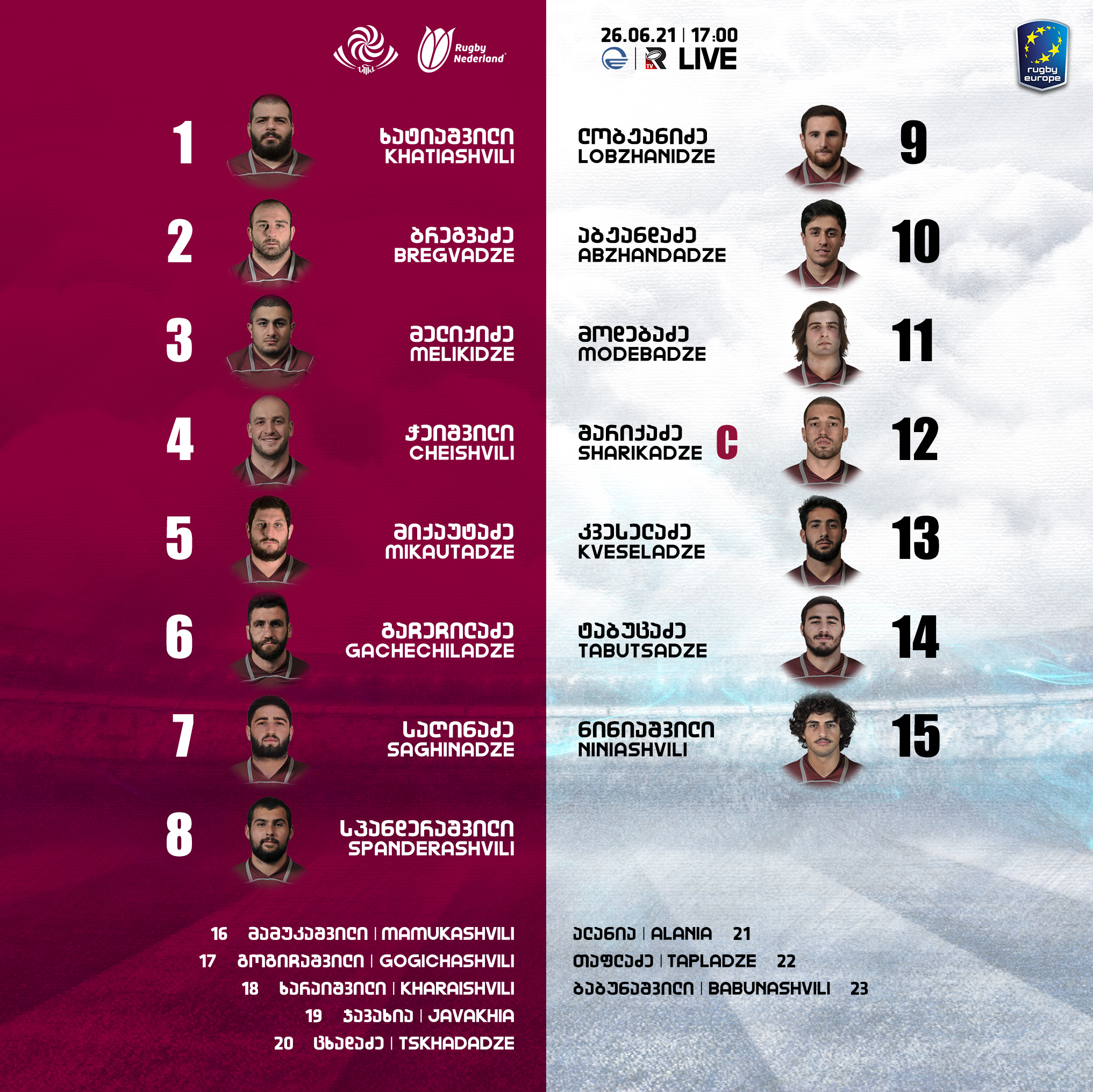